Mr. Chris Hosmer has been teaching at Jacksonville State University since 1996. He currently performs as principal tuba with the Gadsden Symphony Orchestra, the Rome (GA) Symphony Orchestra, regularly performs with the JSU Brass Quintet, and is often performing as a freelance musician. He has recently earned the title of Distinguished Instructor of Tuba Euphonium (Fall 2020). Mr. Hosmer has performed with the Terre Haute Symphony Orchestra in Terre Haute, Indiana and the Owensboro Symphony Orchestra in Owensboro, Kentucky. He has appeared as a soloist with the JSU Community Orchestra, the Parsippany High School Band in Parsippany, New Jersey and with the Emma Sansom High School Band at the AMEA Conference in Tuscaloosa, Alabama. He has performed solo recitals at the Southeast Regional Tuba Euphonium Conferences (SERTEC) at the University of North Florida in Jacksonville, FL and the University of Tennessee in Knoxville, TN. At the Electrobrass Conference (2017) in Cookeville, TN, he performed solo with the Jacksonville State University Tuba Euphonium Ensemble. Mr. Hosmer has taken the JSU Tuba Euphonium Ensemble to perform at several SERTECs since 2011. The ensemble has performed in Chattanooga, TN (2011), Jacksonville, FL (2013), and Knoxville, TN (2015). The SERTEC in 2017 took place at the University of Alabama in Tuscaloosa, AL where the JSU Tuba Euphonium Ensemble with ENCORE! (JSU Show Choir) performed our special performance of TUBAWEEN. The JSU Tuba Euphonium Ensemble has also performed at the International Tuba Euphonium Conference (ITEC) which was also held in Knoxville, TN (2016). Mr. Hosmer has studied tuba principally with Dr. Harvey Phillips, Dan Perantoni and Dr. James E. Roberts. Mr. Hosmer’s varied professional experience includes being an active composer/arranger. He has many arrangements published through Cimarron Music. Four of the arrangements that have been published were reviewed in the ITEA Journal. Several of his compositions have been performed by the Indiana University Tuba Quartet, Indiana University Tuba Ensemble, the Jacksonville State Tuba-Euphonium Ensemble, the JSU Community Orchestra and the Etowah Youth Symphony. He served in the United States Marine Corps Reserve in Rome, Georgia as well as in Red Bank, New Jersey. He is currently the Webmaster for the JSU Music Department. 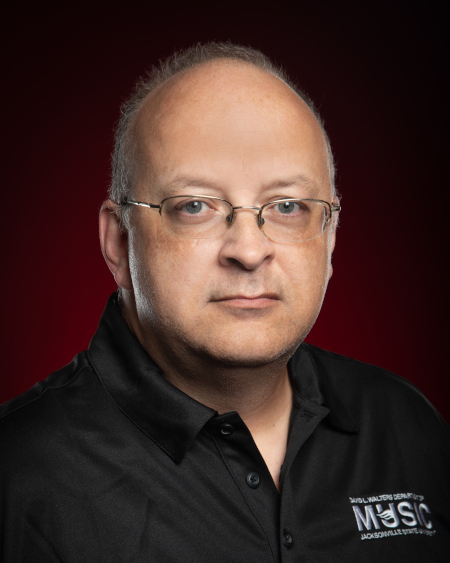